Pre-Convocation Preparations:
Plans for this Convocation began to be discussed by the Conference of Bishops several years ago.  It’s taken this long to design, plan, make all the preparations and accommodations, determine speakers and participants, and develop the communication efforts to publicize and promote the Convocation.  It began with a theme of Religious Liberty; however soon after Pope Francis published his major apostolic exhortation, Evangelii Gaudium (The Joy of the Gospel), it became clear that religious liberty would be one of several major themes under the overarching category of the New Evangelization and bringing the Joy of the Gospel to our part of the world here in America.
While many were concerned about the timing of the proposed event (over the 4th of July holiday) and the location of the event (Florida in July?), the combination of excellent rates at that time of year and the availability of people to travel and participate during those days, and facilities big enough to manage the expected turnout made Orlando the desirable location.  The Bishops discussed this event at several of the Conference meetings and wholeheartedly endorsed the project and enthusiastically became the hosts/inviters for this major, national event.
Each Bishop was asked to begin planning for this event by selecting a delegation to represent the Diocese and to make sure that the costs of sending the delegation were provided in the budget.  In our case, we were able to receive a good bit of financial assistance through Catholic Extension and some other grants received.
Our diocesan delegation is made up of seven people to accompany me to the Convocation: Father German Perez-Diaz, Father Tom McNally, Deacon Candidate Dr. Don Bouchard, Diocesan Staff members Jamin Herold and Lisa Irwin, Catholic Charities President/Executive Director Tim Leiser, and Parish Youth Leader, Joy Livingston (St. Margaret Parish).  In addition our Diocesan Staff member, Socorro Truchan, who was technically representing NACFLM (National Association of Catholic Family Life Ministers), also joined with our delegation as the 9th member.

Our delegation met several times before leaving for Orlando to get to know one another and to plan our strategies for making sure that we could make the best use of our time at the Convocation, e.g. selecting which of the many Breakout Sessions we would plan on attending, etc.

The Days of the Convocation:
From a personal experience perspective, I have attended many national meetings/conferences/convocations in the past, but none was as major, as vibrant, as enthusiastic, as diverse/inclusive, as massive as this one proved to be.  The expected number of attendees was over 3,000 representing more than 150 Dioceses throughout the United States, and every national organization, ministry, and movement, and representatives from a large number of religious women and men.  Participants stayed in several of the large hotels surrounding the primary meeting space which was the Hyatt Regency Hotel and the Orange County Convention Center.  As we were warned beforehand to bring comfortable walking shoes, that suggestion proved so true in the amount of walking that was required to move from hotel room, to meeting/convocation sessions, to lunch or dinner locations.  One of our delegation members, Joy Livingston, who wore a fit bit, was able to determine that during the 4 days she was there, she walked more than 24 miles. My legs can attest to a close proximity to that amount for me.
It was so encouraging to see the entire Church in microcosm gathered together for these days of prayerful reflection, renewal and strategic planning: lay women and men, religious, deacons, priests and bishops, all participating together in this very important convocation.
There were four themes for the four days: July 1---Unity in the Joy of the Gospel and our need for a new outpouring of the Holy Spirit; July 2---Renewal in light of the state of the “landscape” of our Church in the United States (based on current research and data) in a spirit of “evangelical discernment”; July 3---Witness---going to “the peripheries” to accompany those disengaged from the Church and/or those suffering from poverty (material and spiritual), those with disabilities, those who are hurt/alienated; and July 4---Mission---equipping leaders  with resources (spiritual, catechetical, practical) to help them in their ministry and in being formed as true missionary disciples, being mindful that ministerial excellence is only possible by a daily reliance on the Lord.
Major keynote presentations were provided by Cardinal Dolan, Cardinal Wuerl, Cardinal O’Malley, Cardinal Tobin, Cardinal DiNardo, Archbishop Gomez, Archbishop Lori, Bishop Robert Barron, Dr. Hosffman Ospino (Boston College), Carl Anderson (Supreme Knight, K of C), and Patrick Lancioni (Amazing Parish).   There were many other gifted speakers who served as Panelists responding to the major plenary sessions including:  Dr. Helen Alvare, Fr. Tom Gant (CARA), Bishop Frank Caggiano, Sr. Mariam James Heidland, SOLT, Curtis Martin, Sherry Weddell, Fr. Paul Check, Dr. Carolyn Woo, and many others. [Check out the USCCB website for a host of videos recorded at the Convocation as well as exclusive EWTN interviews with the keynote speakers.]
In addition, there were 66 Breakout Sessions/Workshops where many more nationally known speakers participated as panelists/presenters on a wide-range of topics in regard to those major themes.  I was privileged to be one of the Bishops giving Opening and Closing comments for a Breakout Session on "Reaching Wounded Families, those struggling with Brokenness."
Lest you think the focus was only on presentations and breakout sessions and sharing information, I would say that the primary focus of this entire Convocation was on prayer and Liturgical Celebrations, with a clear focus on the Holy Eucharist; in other words, the focus was on Jesus.  Each day, the entire assembly came together for the Celebration of the Eucharist, which was beautifully celebrated.  There was a Eucharistic Chapel set up for the opportunity for regular private prayer in the Presence of the Blessed Sacrament; there was never a time that I went into that Chapel that it wasn’t overflowing with people, filling every chair and sitting/kneeling on the floor.  There were regular opportunities to receive the Sacrament of Penance throughout the 4 days, with priests hearing Confessions during the many assigned times during the day.  In addition to the daily celebration of the Eucharist, there were other powerful devotions included. On Saturday evening, there was a time of prayer in honor of Mary, Mother of Evangelization. On Sunday evening, there was an Evening of Adoration and Reflection: “Encountering Jesus, Healer of Wounds and Source of Mercy”.   On Monday morning, there was an early morning Eucharistic Procession through the streets surrounding the Hotels/Convention Center 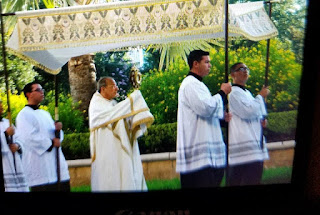 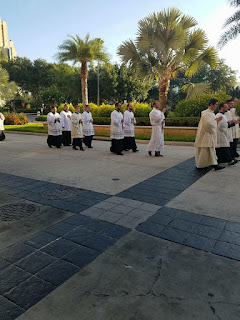 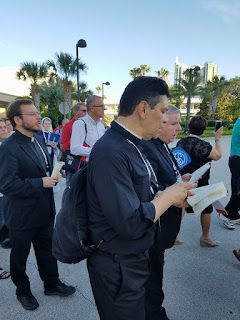 with the thousands of Convocation participants processing in quiet praise of Jesus, Who accompanies us on our journey of faith; and on Monday evening (Eve of 4th of July) there was an Evening Experience of Praise: “A Celebration of Faith, Witness and Mission”.

At the conclusion of the Mass on Tuesday afternoon, the Apostolic Nuncio, Archbishop Christophe Pierre (shown left)  gave an incredible talk summing up the entire Convocation. Archbishop Pierre participated in all four days of the Convocation and was truly the representative of Pope Francis with us all throughout our time together.  I was privileged to have a nice chat with him about the state of our Diocese, and he was very engaging and interested.

All in all, this was an exceptional Convocation of Catholic Leaders, and I do believe that this Convocation represents (as Archbishop Pierre says) a “kairos” moment for the Church in the United States.  I truly want that to be the case for the Church here in the Diocese of Kalamazoo, and I look forward to the ways that those who represented our Diocese as Delegates to this Convocation will continue working with me, and many others, in helping to develop a strategy and a plan to renew our Local Church and to find new ways to bring the Joy of the Gospel to all those in our Diocese, beginning with each of us: lay leaders, religious, deacons, priests and bishop.
As Cardinal DiNardo said at the conclusion of his Homily in the Final Mass: “what more is there to say, but: ‘Come, Lord Jesus’!”
Posted by Diocese of Kalamazoo at 12:09 PM No comments: